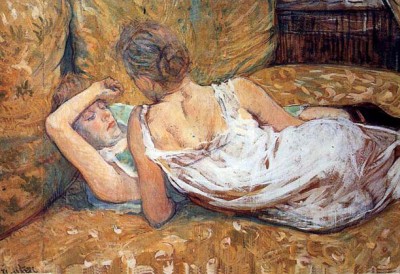 as i walked the dogs this morning i had a bit of a revelation.  something that had crossed my mind before, but not to the same extent.

i always seem to have a woman on my mind.  this is a given.  lately, though, i’ve been thinking about women and their place in my life in a deeper way than i ever have before.  or maybe there’s a better way of putting it.  in a clearer way.  i’ve spent winter break writing, wrapping up yet another draft of my novel and outlining the next.  the muse aspect of this subject is a given.  this one, though, is much more vague, muddled.

when i was twelve or so i went to summer camp for a week.  i had such a crush on our camp nurse, nancy.  but it was also a time in my life where i was truly beginning to feel the absence of my mother.  i reached out to her as i often did with others then.  she, another to take me in.

as my relationship with nancy deepened, it also grew in its complexity.
i used to spend summer and winter vacations with her.  she lived up north, in the mountains.  she was always very affectionate with me, which i loved.  effusive, expressive.
she gave me my first taste of the subversive.  here i was, this naive quasi-orphan kid from the suburbs sitting with her in smoke filled A.A. meetings down the block from where she lived.  the stories i heard were fascinating.  stories of drunks passed out in the snow, women sucking dick for speed.  she told me hers.
getting pregnant at sixteen, giving her daughter up for adoption.
i think she saw in me a second chance.
i loved hearing her stories from the sixties.
a framed picture of herself sat on top of her piano
from that time.
black and white at the end of a pier
checked bikini
one foot flat on the wood
her other leg flat in front.
remembering now she might have been high, stoned.
i would stare at it, fascinated
as i sat next to her when she would play me ‘imagine.’
i might have been fourteen or fifteen by this time.
she had a bad back, would ask me for back rubs.
i’d sit on her couch, she on the floor in front of me.
most of the time she’d strip down to her bra.
sometimes she’d ask me to lay in bed, cuddle her under the covers.
and i can’t say that i didn’t enjoy it.
that kind of attention.
but i didn’t think of it in sexual terms, really.  it was.  but it never felt wrong to me then.
i even remember being jealous when she told me one summer her friend, leslie, would be around a lot but then was heartbroken when they’d had falling out.
of course, clueless freak that i am, it wasn’t until years later that i came to see the fuckedupedness of this relationship.  i mean.  that’s my inclination.  to see it as that.
but being close to her like that left me with no doubt.  it helped me become.
it is as though these two sides of me
queer and motherless
inform each other in a way
feed my art
some relationships, grey
some bounded physically but not spiritually
and vice versa.
my inclination was to judge the grey this morning.
to classify it as sick or fucked-up.
write in my journal and freak out.
i would rather see the beauty instead.